Table Topics: The students suggested 9 topics: Government, Divorce, Pollution, Music, Illiteracy, Freedom, Culture, Gaming, and Politics. Immediately after, the students were asked to vote for each topic, and “Freedom” was the one that got 25 votes.

Speeches: The 32 students were divided into 8 groups of 4 and were given 10 minutes to go out and prepare their 3 minute speeches in a language of their choice. In the 10 minute period of time, the pupils were able to each answer the question: “Do you think you are free?”, as well as pick up names for their groups. The groups were evaluated based on their timing and performance.

Rating: At the end, the students were asked to vote for their best performing group. The winning group was assigned a mission, that of repeating the same exercise with their absented friends.

This activity allowed the participants to learn how to speak their mind, transmit their ideas freely, and be concise.

I was amazed by the diversity of everyone’s ideas, the way they presented them, and the choice of languages. The majority of the groups chose to speak Arabic, Tamazight, French, and English. The concept of freedom for these youth was limited in their struggle to attain a total freedom of choosing what they want to study, where to travel, and what to wear. However, they know how serious it is to let somebody else decide for them, and showed that they are willing to change that.

As a member of ciPLAY, I chose to share some of our exercise with the students who were so enthusiastic to learn more about what we do at the institute. So, I introduced them to the ecosystem and shared with them some of the exercise we had during Sarah Rose’s workshop. Due to time constraints and the large number of students, we were only able to have two exercises:

As they grew comfortable, the students asked me if they can share some of their talents. The workshop ended with singing, Tai Kwando tips, and original poems by the students themselves.

The two teachers and students from the club 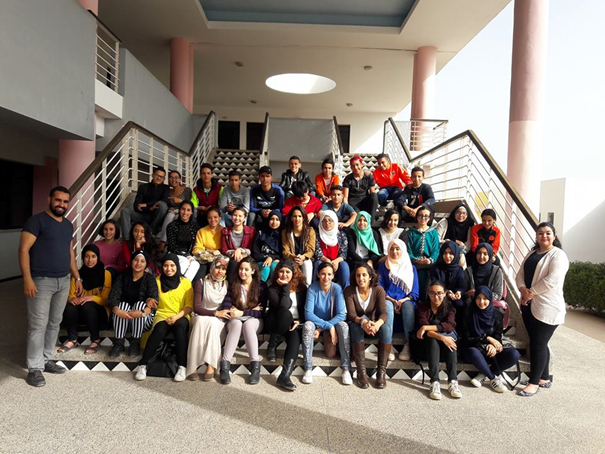